Because of the 3. Medival-Rockfestival in Illingen on 30.3.2007 our
magazine had the chance, to interview Korpiklaani. The questions were
asked by Stefan Fruehauf and answered by Korpiklaani-singer und -guitar
player Jonne and bass-player Jarkko.

(for the german version of the interview klick here) 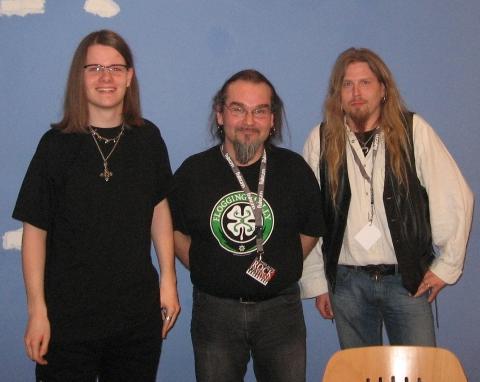 Today we´ll see you play here in
Illingen, Germany. Is this quiet little festival routine for you or are
you still a little excited before playing your shows?

Jonne: We are always excited to play this kind of shows.

Jarkko: We
played many sizes of festivals and it doesn´t matter how big it is…
if it´s Wacken or it´s more like this, so it´s good to be here.

A
lot of Korpiklaani lyrics deal with nature and the name Korpiklaani
means “Clan of the Forest”. How important is nature for Korpiklaani?

Jonne: It´s pretty important because we are from Finland and most of Finland is forest area. So it is part of our lifes all the time.

Who writes the lyrics of Korpiklaani?

Do you when you play your shows feel a difference between the german fans and the fans at home in Finland?

Jarkko: It´s quiet hard to say because we don´t really play so much concerts in Finland.

It´s too finnish for Finland?

Jonne:
Yeah, because in Finland it is kind of old peoples music with heavy
metal guitars. (laughs) But of course we have our fans in there and we
play there many times in the year but it´s not the same kind like here
in Europe.

Your music makes you travel a lot of countries like Russia, Germany or Hungary and this year you will even go to Japan. Is there still a country left, that you would really wish to travel with your music?

Jarkko: It´s not a country, it´s a continent!

Jonne:
Anyway. Well, for some reason I don´t think this music will be that big
in any african countries. But we still have countries in Europe to go
that we haven´t been.

Jarkko: It´s always sort of
exciting or maybe a bit nervous to go to a new country, because we
don´t really know if we are popular there or not, so it´s always
interesting to see if there is anyone going to be at the concert or not.

Jonne: Is Australia a country?

Jarkko: Yeah. And it´s also a continent, but now you are right, that´s a country.

Jonne: Can I say Australia?

Jarkko: You can say that.

What was the most memorably moment in the history of Korpiklaani?

Jarkko: With this band there´s this problem, that even if there are moments like that, not many of us remember those, you know?

Can you tell us something about your next album “Tervaskanto”?

Jarkko: I haven´t even heard it myself fully, yet. I
have this crappy mp3-files of it. I can´t even really comment about the
sound or anything, because I have this raw-mix from the moment when
there were still some vocals and some instruments missing and the
finish product I have only as this crappy mp3-files.

Jonne:
It´s maybe a cliché, but I can easily say, that it´s our best album. And I
didn´t say it because it is the kind of cliché but because I really
feel like that. At the beginning when we started to make it, I was
really nervous, how it would be, because we didn´t had enough time to re-hear something when we went to the studio.

Jarkko: We were so much touring that we just didn´t have time to re-hear the songs.

Jonne: But surprise, surprise, it became our best album.

Jarkko: We´ll see about that when we hear it.

We´ll come to the end now… Is there something you would like to say to your fans and give them on their way?

Jonne: Hope to see you all at our gigs and… what else can I say?

Thank you Korpiklaani for that interview!