Very soon “Gylfaginning”, the debut album of the british one-man-music-project Oakenshield, is going to be released.

Not long before that happening, we had the chance to ask Ben Corkhill, the man behind Oakenshield, some questions.

This is the english original text of the interview. For the german translation klick here.

Have fun to read the interview! 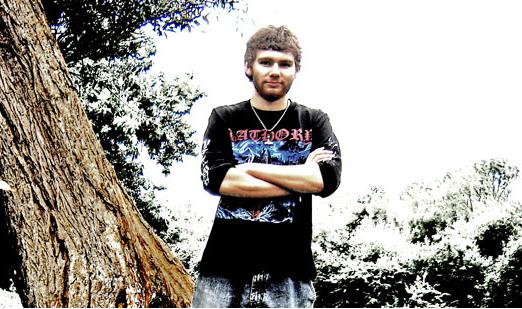 Very soon the first album of your one-man-music-project Oakenshield, “Gylfaginning”, is going to be released. What was the most difficult thing during the development process of the album?

The main problem while recording the album was the issue of time. I was working two jobs at the same time as recording a full lenght album, but I managed to schedule it all properly and find enough time to do both. I also left the country for three months in March, so I had to finish it all completely before then as well.

“Gylfaginning” deals a lot with mythology. Why did you choose mythology as topic for your album?

When I first began recording Viking Metal, I was more heavily influenced by bands like Amon Amarth and Bathory, whose lyrics reflected a lot of the war-like and violent side of Viking history. After a while I realised that I wasn’t really saying much that other bands or indeed my own songs had said already, so I decided it was time to focus less on war and plunder. This was also around the time I started to really focus my personal interest on the mythological and folkloristic side of things, so the two kind of came together. After reading “Gylfaginning”  (historical book about nordic mythology, note of editor) I started to imagine some of the stories in song form, and the idea to use it as a concept came from there. I prefer to write about mythology because it is a much broader subject and there are endless stories to be told, many of them untouched by Folk-Metal-Bands. Something I adapted musically from the mythological tales are underlying themes and recurring characters etc, which play a big part on the album.

The debut album of Oakenshield: “Gylfaginning”

Many folkloristic influenced Metal-Bands deal with non-mythological fantasy stories in their lyrics. Would these stories of orcs, trolls and elves also be an adequate topic for the texts of your music?

I don’t think I would necessarily write about fantastical creatures such as orc, but indeed there are important aspects and appearances made by trolls, dragons and elves in Norse mythology and folklore, so there is definitely a possibility that some of these could feature in Oakenshield lyrics. There could also be more of a magical element to future Oakenshield lyrics; shape shifting, incantations and so on.

Was it from the outset of Oakenshield clear that the project would only consist of you or did you ever think about the incorporation of other musicians and the enlargement of Oakenshield to a full-manned band?

I only started to think about live performances once I became involved with Einheit (Einheit Produktionen, label of Oakenshield, note of editor), but they would definitely be something for the future, this is just the beginning. I don’t think there would ever be an Oakenshield “line up” but session musicians are a possibility for future releases. As for writing the material, it will always be a one-man-thing.

What are the pros and cons of working alone in a one-man-music-project compared to working in a band?

I’ve been in a few bands before and I would definitely say it is good to work with other people in writing songs, and it is great to perform live on stage. However, with Oakenshield I have total creative control, which is why I began to write for Nifelhel (foundation name of Oakenshield, note of editor) back in 2004. I like to write songs which are totally my own, so that I can bring out my own influences and ideas in the music. 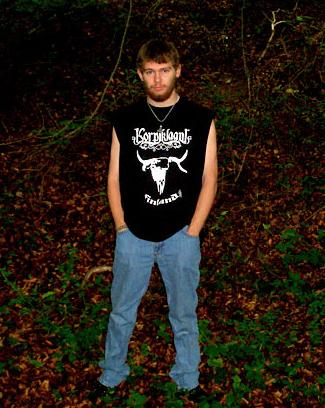 The man behind Oakenshield: Ben Corkhill

By which musicians and bands is the music of Oakenshield influenced?

The bands that inspired me to write this kind of music were Amon Amarth and Bathory, the first Viking-Metal-Bands I listened to. From there I discovered more about Viking history and mythology as well as getting deeper into the genre. Now I am influenced a lot by bands such as Falkenbach, Enslaved, Thyrfing and Tyr as well as bands of other genres.

Is there a band or musician you would like to record a jointly song with?

Of course if he where still alive, I would love to record a track with Quorthon (1966 – 2004, singer of Bathory, note of editor). I think Abbath from Immortal or Heri Joensen from Tyr would provide some great guest vocals though.

Are you active in any other music projects beside Oakenshield?

About a yeat ago I recorded some songs for a Death-Metal-project with a friend on vocals, but nothing has been done with that since. I also played bass in a long-running band which may be rekindled for som gigs this summer, but we’re yet to see about that. Mainly due to leaving college and working full time, I don’t have enough time spare to play in a band, although I would enjoy it.

Is there anything you would like to say to our readers?

Thanks for reading, keep supporting Metal music and try to listen to as many new bands as you can. Remember, Viking/Folk Metal isn’t a passing fashion, and it isn’t novelty music. Also, be sure to buy “Gylfaginning”!